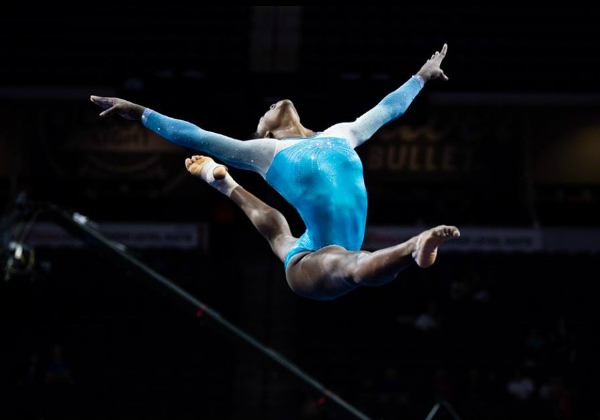 Emma Malabuyo from Texas Dreams won the all around competition in the Junior division with a total of 56.75 after a superb meet with hit routines on all four events. She started the meet with a solid DTY (14.5) and a good bars routine (13.5). On beam she impressed with a difficult set: double wolf turn, flick -loso- loso, standing Arabian, aerial walkover which she intends to connect to a ring jump, switch ring leap, double pile dismount (14.45/5.9). She finished on an even higher note on floor where she earned the highest score on the event, for both seniors and juniors: double layout, front 2/1 to punch front to wolf jump,full in, double pike (14.3/5.6).

Maile O’Keefe finished second, which was a bit of an upset for her (54.7). She started with a mistake on bars where she missed a kip to handstand and had to take an extra swing but recovered well. On beam however she looked very tense, she hit all her difficult elements (with some wobbles) and then fell on a simple leap series. She was great on floor and vault but could not make up for the lost ground. Grace McCallum finished 3rd with a total of 54.15. Her best event was vault (DTY) and had consistent executions on all events, with difficulty in the low 5s.

Gabby Perea only competed on bars, event that she also won, with a 14.5. Her difficulty was 5.7 despite the fact that she did not present a dismount (she finished with a simple layout).

Adeline Kenlin competed only two events and managed to finish on the podium for both: on bars she was 3rd with a 14.05/5.7. She won beam with a huge score of 14.75/6.1: split leap to switch 1/ to back tuck, side aerial to layout stepout, split jump 1/2 from the side of the beam, flick- bhs-layout to two feet, double pike dismount.

Find here all the results: