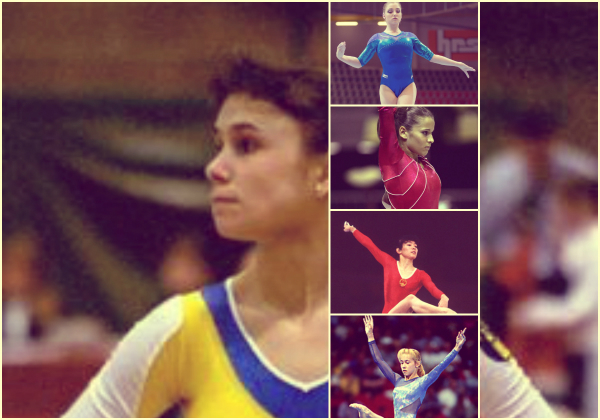 While gymnastics is often looked at as an individual sport, teams still need chemistry and leadership.  This List will look back at the impressive leaders of programs that saw great success.  Some were vocal, some were the backbone, some were groundbreaking—all were a key factor in the history of their team’s impact on the sport.

Ma Yanhong CHN When Chinese women’s gymnastics made its debut on the world scene in 1979, they finished an impressive 4th, and Ma won the title on bars (shared with East Germany’s Maxi Gnauk).  While she was sometimes weak on vault and floor, Ma’s fluid swing and daring skills on bars changed the landscape of women’s gymnastics.  Her country boycotted the 1980 Olympics, but she persevered and continued to guide the team into the next quad.  Ma continued her own successes while showing support for her teammates who were also trying to make their mark in the sport with innovative new skills.  Ma fulfilled her Olympic dream in 1984, helping Team China to a bronze, and scoring a slew of perfect tens on bars on her way to a share of the uneven bars gold with Julianne McNamara (Ma also qualified for beam and floor finals).  Ma was China’s first World and Olympic Champion, and she helped forge the future of Chinese gymnastics with her teammates. Here is a video celebrating her career when she was inducted into the International Gymnastics Hall of Fame—her pride and joy of leading her team is very evident!

Boriana Stoyanova BUL A star gymnast from the exciting and up-and-coming Bulgarian program, Stoyanova found herself among the top tier of gymnasts after winning vault at the 1983 Worlds, as well as a bronze on floor and finishing 4th in the all-around.  The boycott of the 1984 Olympics by many nations meant that Stoyanova missed a great Olympic chance, but she kept going.  She helped Team Bulgaria to a fourth place finish at the 1985 Worlds, then a fifth place finish in 1987.  While Stoyanova’s talent slightly diminished as her young teammates took over the reins, she helped set the stage for new Bulgarian stars Dudeva and Vodenicharova.  But Stoyanova lasted to the 1988 Olympics, finally making her team and helping them finish 5th, contributing a 9.975 on vault in team optionals. She also placed 13th in the all-around and 4th in vault finals—an impressive finish from the world champion from five years earlier!  Stoyanova helped keep the Bulgarians relevant amongst the strong Soviet, Romanian, and East German teams, and she displayed true commitment and dedication after being denied her initial Olympic chance. A strong showing on compulsory beam at the 1988 Olympics.  She scored 9.700—would it have gone higher if she was from a stronger country?

Eva Rueda ESP As a young gymnast on the 1987 World Championships team that finished 12th, Rueda stepped up in a big way by helping Team Spain move up to a 9th place finish at the 1988 Olympics.  She continued into the next quad, helping her team to a great 7th place finish at the 1991 Worlds, guaranteeing a full team from Spain would be represented at their host Olympics in 1992 in Barcelona.  Rueda was a key factor in helping the team gain momentum and experience as they prepared to compete in front of their home crowd.  While several of her younger teammates started to surpass her scores, Rueda remained the key leader of the team that finished a historic 5th.  Rueda also qualified for vault finals, finishing 7th with her strong Yurchenko full.  Finally retiring after her second Olympics, Rueda is remembered as the face of a great team that worked incredibly hard to achieve amazing results. Here is her highest scoring vault in team finals (9.937)—

Lavinia Milosovici ROM A two-time Olympian, Lavinia Milosovici, or Milo, won a boatload of medals and titles.  While she was the clear heir apparent of Nadia, Ecaterina, and Daniela, it was her care and concern for her teammates that shone as brightly as her medals.  After Romania won two world team titles in 1979 and 1987, Milo and Co. began the impressive streak of five titles in 1994.  While Milo was a great all-arounder, she never won the major title she was seeking, but she always gave her all in team competitions.  Included in her collection are an Olympic team silver and bronze, as well as the heart and soul of a legendary program. A look at Milo’s floor at the 1994 Team Worlds, Romania’s first title since 1987.  She had the highest all-around title at this meet.

Olga Teslenko UKR Sure, there are a few other big names from the Ukrainian team during Teslenko’s era (Podkopayeva, Sheremeta, Kvasha, Roschupkina, Karpenko, etc.), but Teslenko maintained a steady hand on the pulse of Ukrainian gymnastics as they experienced several highs and lows.  While the program saw significant success, they also toiled through injury and unfortunate circumstances (competing with only four gymnasts at 1997 Worlds; finishing a controversial 4th to China in 1999—only later to be rewarded with the bronze.)  While others were heralded as the next medal hope, Teslenko showed consistency in her training and resolve to help her team.  A young member of the team in 1996, Teslenko finished 5th on beam in finals, and she continued to compete all the way through until Sydney.  While the team faced injuries, retirements, and controversy, Teslenko remained steady and a true leader of a program that was looking to find its way. A top notch beam worker, she finished 5th at the 1999 Worlds.

Alicia Sacramone USA After a disappointing 2004, Alicia Sacramone, or ASac, came back strongly in 2005 by winning a world medal on vault and the world title on floor.  After 2006, she gave up bars in order to favor her other three events, but being a specialist did nothing to tarnish her natural leadership skills.  A vocal and supportive leader, ASac utilized her experience and maturity to guide her teammates to confident and fierce competitors.  Most notably, after a disastrous beam rotation at 2007 Worlds, ASac rallied the troops and inspired a stellar floor rotation, which clinched Team USA’s first World team title since 2003.  The captain of the 2008 Olympic team, ASac had an uncharacteristic competition in team finals—you could see that her biggest disappointment was feeling like she let her team down.  But fans were eager to see her comeback, making a run for 2012, which was hampered by an Achilles injury.  As the torch was passed to her training mate Aly Raisman, ASac remains a key figure in leading Team USA! That super strong performance in 2007—

** ** And her strong interview after team finals—

Aliya Mustafina RUS A personal favorite, Aliya Mustafina, or Musty, was a key leader in the resurgence of Russian gymnastics.  Helping the team to a historic World team title in 2010, she led the way with her gutsy Amanar, new bars dismount, tough as nails attitude and choreography on beam, and iconic Hijo de Luna floor exercise.  She was on the top of her game when she unfortunately tore her ACL at the 2011 Europeans.  She had to sit out the Worlds that year, and some may have doubted that she could come back for the London Olympics, but Musty knew she would be there.  Walking away with four medals, Musty kept going through 2013 and 2014, carrying Team Russia on her back.  While she started to slow down after competing non-stop, she took a much needed break and recovery period in 2015.  But she returned with a new fire in her eyes in Rio, almost duplicating her results from London—team silver and all-around bronze, as well as another gold on bars, following in the footsteps of Russian legend Svetlana Khorkina.  Now that she is married and had a baby, some thought Musty hung up her grips, but she has made several appearances to show that she still has more to give for her country and her sport! A montage from 2010, showing Musty’s closeness and bond with her team—