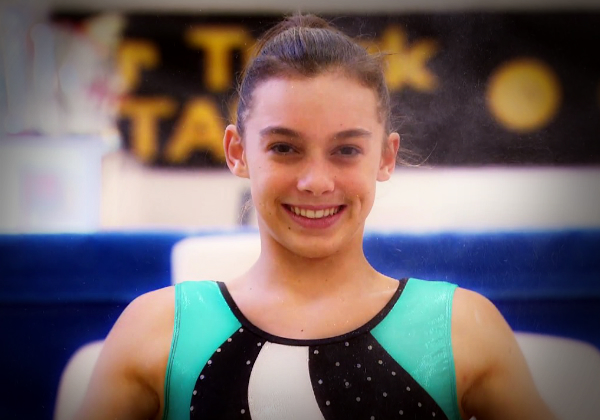 The last meet of the Serie A happend in Turin and, as expected, Brixia Brescia took the crown. But more than that, I’m interested about the performances of th girls, who are going to have a busy summer with the Mediterranean games (seniors) and the Youth Olympic Games qualification (for juniors).

Enrico Casella already told the press the Mediterranean games’ team will be made of AA gymnasts, ruling out gymnasts like Carlotta Ferlito, who’s back on every apparatus but bars. He also already invited the gymnasts to the selection camp: Lara Mori, Giada Grisetti, Caterina Cereghetti, Noemi Linari, Desireè Carofiglio, Martina Maggio, Martina Basile and Sara Berardinelli.

Let’s see how they did in Turin.

Caterina Cereghetti, a young and inexperienced gymnast from Centro Sport Bollate, the same team as Grisetti, didn’t have the best day . Caterina is a nice gymnast to watch, with good lines and clean skills, but she doesn’t have a good enough difficulty to match the rest of the team yet. She hit a low FTY (13.30), had clean execution on bars (piked jaeger, tkachev, bail, double piked dismount, 4.8-13.1) but fell on beam (4.8.10.85) and landed oob with both feet on floor (4.8-11.30).

Martina Maggio and Sara Brardinelli are both back from injuries. They won’t be part of the Mediterranean games beause they’re still recovering,  and both of them  competed downgraded routines with some minor mistakes and wobbles.

Elisa Meneghini, ostracized after declining the Jesolo assignment, needs to unveil something extraordinary to be able to be in contention again. Casella is still mad at her, and refused to let her attend the next camp because “ she must regain my trust”. Elisa’s routines weren’t that great, but considering the team status, she’s very needed. She fell on beam (5.6-12.60) but she vaulted a clean FTY (13.60) had a nice bars set (4.8-12.90) and a powerful floor (full-in, double Arabian, double back, double piked, (5.0 -13.50).  It’s so frustrating to see how good she can be but how she’s wasting her talent with poor decisions.

The Senior team is not looking great, we have low difficulty and inconsistent gymnasts, so I predict they will fight for the silver medal in Tarragona, leaving a deserved gold to France. In my opinion, the team will be made by Lara Mori, Giada Grisetti, Desireè Carofiglio, Martina Basile and Noemi Linari. A team which is quite good on floor and vault, but weak on beam and especially on bars.

Asia D’Amato was rested on beam, but competed on the other 3 apparatus. Asia is rock solid and hardly makes mistakes, she was great here too, with a beautiful DTY (14.65) upgraded bars  (5.8-13.95) and a good floor routine ( double arabian, full-in, Popa, switch split+swtich split 1/1, double tuck, split leap 1/1, double twist, 5.0-13.20). Asia is looking stronger and stronger every day and she’s definitely giving Villa a run for her money as the best Italian gymnast.

Alessia Federici is the youngest girl of the group who will be in contention for Junior Euros in a few months. Alessia is a fabulous beam worker with an original set ( fhs+front tuck, front aerial, switch split leap+splt ring jump, double turn, aerial cartwheel, bhs+bhs+double twist dismount, 5.2-13.20), but she’s having some issues on the other apparatus, struggling a bit with consistency.

Asia and Elisa will be in Baku and have a nice opportunity to show their progress, they’re both great gymnasts with a lot of potential, Elisa just needs to put it together. Giorgia will probably be chosen as the Youth Olympic Games competitor and, again, she has a great chance to be one of the main faces of the meet. Alice D’Amato is slowing coming back from the knee injury, but if she won’t be ready in time for Junior Euros, Alessia will be a great replacment.