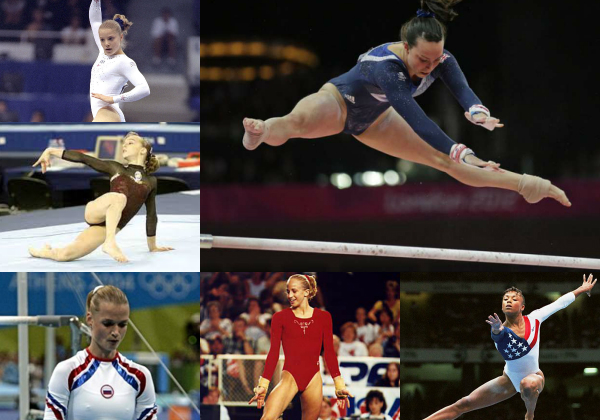 In every code of points, there are certain skills or combinations that became the norm and common throughout many routines.  For instance, side jumps with a half turn on beam, high to low back to high transitions on bars, etc.  We have seen the trends of gymnastics evolve over the years, and this List will highlight a few gymnasts who were ahead of the curve!

Side Choreography on Balance Beam Dominique Dawes The code of points as of late requires gymnasts to perform side choreography.  This encourages gymnasts to show more creativity and wider range on the balance beam.  But way back in the early ‘90s, national champion Dominique Dawes from the US was already capitalizing on this idea!  Her stunningly beautiful and difficult beam routine was full of tricks, jumps, and spins, and it also contained a glimpse into the future trend of the apparatus.

Turns on Floor Elena Gomez, Alyssa Beckerman With the rise of Orange Elegance style choreography and significant difficulty given for complex dance combinations, gymnasts are attempting ambitious turns and spin combinations.  From Mustafina’s triple spin in a y scale, the Semenova turn, and Thorsdottir’s stunning turn sequences, gymnasts are making the most of the code of points by throwing difficult spins alongside flips.  Below are two videos of gymnasts from the early 2000s who were already showing proficiency in this area!  The first is Elena Gomez of Spain, the first World Champion for her country, and namesake of the quadruple spin on floor.  Second up is Alyssa Beckerman of the US, competing at Olympic Trials and showing off her sublime floor style.

Uneven Bars Transitions Larissa Fontaine, Svetlana Khorkina, Beth Tweddle In the current environment, all of the top bars workers show a working knowledge of complex release and transitions—quite a different scene from when bars consisted of high bar pirouette and release, bail to low, hop up to high, maybe another release, then dismount.  Here, we highlight three gymnasts who showed that they were ahead of their time.  First, Larissa Fontaine from USA, who mastered combination releases and transition back in 1993.  Then, the queen of bars, Svetlana Khorkina from Russia, who basically recreated the event in order to accommodate her tall, slender body.  Lastly, Beth Tweddle from GBR, who adapted Khorkina’s style into her own strength on her way to becoming the greatest British gymnast ever.

Jumps Out of Tumbling Passes Vanessa Atler Once the code of points required female gymnasts to stick their tumbling passes, many gymnasts started jumping out of their tumbling in order to make up for the once allowed artistic lunge.  The code even rewarded gymnasts for this added difficulty, and many incorporated it into their routines, like Lauren Mitchell, Vanessa Ferrari, and Kyla Ross.  When used effectively, these jumps added dynamic drama and artistry to the routines.  While the code encouraged this trend, it was by no means a new invention.  One of the best to utilize this technique was Vanessa Atler from USA, who changed her first tumbling pass from an inconsistent double front to a steady double layout.  Then in 1998, Atler upped her game by not only adding a punch front after the double layout but also throwing a dramatic stag jump that added to the overall quality of her routine.

Wolf Turns _Maria Kuchinskaya, Anca Grigoras _ Yes, I know, the most hated skill in gymnastics!  We were charmed by it initially—Terin Humphrey, Lauren Mitchell, and Sarah Finnegan used double, 2.5, and triple wolf spins effectively and impressively.  But as the current codes gave gymnasts higher difficulty for using them, they not only became ubiquitous, but also lowered in quality and proficiency.  I was curious about the origins of the wolf spin—I remembered seeing Oksana Chusovitina do a single wolf spin in 2002.  After some digging, it appears that Olympic Beam Champion Maria Kuchinskaya from the Soviet Union showed off the skill back in the 1960s. I’m also including Anca Grigoras from Romania in 1976—I love her long lines and super smooth style.  Both Kuchinskaya and Grigoras showcase the wolf spin in a seamless and graceful way!

Your turn!  What are some current trends you can trace back throughout the history of the sport?

Previous The List: Underrated in their Time
Next 2018 Worlds: Event Finals Report and Results