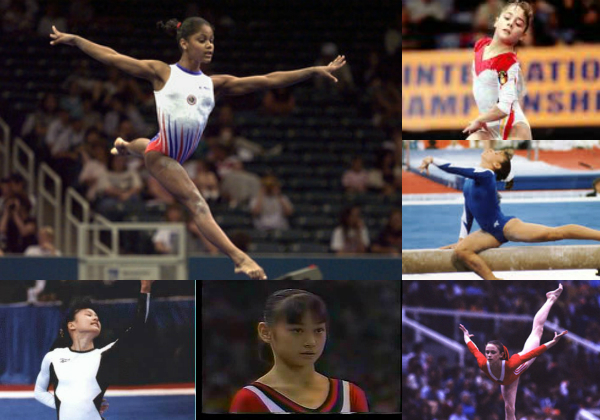 One of the things I appreciate most about gymnastics is that it is a progressive sport- it is constantly moving and advancing in skills and composition.  This List will highlight gymnasts who worked hard, though sometimes a bit under the radar, but who nonetheless helped the sport grow and expand.

The 1981 World Champion on floor, Ilienko was truly a star for the USSR, but she competed in an era of many stars.  While she was on two world championship winning teams, she often failed to make finals due to the country limit.  She also missed an Olympic opportunity when the Soviet Union boycotted the 1984 Olympics.  At the Alternate Games, Ilienko still missed out on all-around—top three per country made it to finals; she was fourth.  While Mostepanova graced us with her charm, Yurchenko gave us great innovation, and young Shushunova was making her mark, Ilienko was also a gymnast of great quality.  Notably, her fluid expression on floor and ability to keep a routine moving was impressive.  While she wasn’t always perfect, she found a way to blend the athletic with the artistic in an enviable fashion.

An exhibition performance, which highlights her exceptional connection to the music-

In the time of the Magnificent Seven era gymnasts from the USA, Chow was a key player, but often under the radar of the big names of Miller, Dawes, and Moceanu.  But Chow gained attention from gym fans for her innovative routines and risky skills.  While sometimes inconsistent (she had a disastrous qualifications at Worlds in 1994; but she came back strong in finals), she battled through some significant back injuries to earn her place on the 1996 Olympic team (which she did after an intense fall at Trials- she smacked her head on the beam, got up, finished the routine, and got the score!).  Of all her teammates, Chow was not necessarily the one picked to win an individual medal, but she did just that with her tie for silver on bars.  Her use of stalders was unusual for that time frame of gymnastics (other than Khorkina, few gymnasts made use of stalders in this quad).  Chow also performed a Cuervo and double twisting Yurchenko on vault, Fabrichnova off bars, full twisting back on beam with a roundoff-back handspring-triple twist dismount, and a front step out to triple twist on floor.  Many of her routines look competitive in this current era!  Chow went on to compete and win a team bronze in Sydney, while also earning her medical degree from Stanford, competing in diving, training in pole vault, and studying piano.  So, basically, she is an underrated human! Her bars are obviously her standout, but here is a super solid beam from 2000 that highlights her tremendous skill-

A spitfire on floor, Oana bounced onto the Romanian team as a senior in 2002 after a successful junior career.  She won a world medal on beam in 2002, then a team silver at worlds in 2003.  While Romania was looking less steady than in the previous quad, Ban showcased the old winning spirit with her highly energetic floor routines and lights out beam routines- her back handspring-back handspring-layout full is still one of the best.  Unfortunately, in Athens, Ban injured her ankle during her floor routine in team finals.  While she qualified in top positions for all-around and floor (she was two-pered out of beam), she had to relinquish her spots and watch from the sidelines.  She retired after 2004, and many remember her teammates Ponor, Eremia, Sofronie, and Rosu.  But Ban was a steady performer who injected a lot of power and precision to her country’s program, and her while her career was short, she remains a sight to behold!

Ban was one of my favoritest juniors, so here she is on beam when she was 13 years old!

A true beam queen and absolute star for her country, Portocarerro performed quality gymnastics that sometimes went under the radar.  She unfortunately did not have a team to build her up, and she would regularly fall victim to the ‘good routine but wrong leotard’ deduction of the early 1990s.  Nonetheless, Portocarerro worked tirelessly to showcase her beautiful lines and top skills at two Worlds and the 1992 Olympics.  Paired with her great flexibility was her precise technique on all of her skills.  She went on to compete for the UCLA Bruins, and she remains a wonderful hidden gym from the Barcelona era.

Here is Portocarerro competing on beam at the 1993 American Cup.  While the fan’s attention was on Shannon Miller and Kerri Strug, the crowd was mesmerized by this routine-

Watching Teza’s routines today is like watching a sport from another time- but not even her time.  Daring, athletic, and expressive, Teza took to techniques of the Chinese coaches who ended up in France and helping the program advance in ways not seen before from their gymnasts.  Teza’s namesake skills are well known, albeit rarely performed.  Aside from her notable skills in the COP, Teza’s overall aesthetic helped her to stand out during her quad leading up to Sydney.  True, she has no Olympic, World, or European medals (thought she was the first non-American to win the American Cup in sixteen years!), Teza’s gymnastics are a thing to behold.

Here is Teza on beam at Worlds in 1997, where a lot of people remember Kui Yuayuan did not win gold.  Do you think Teza should have won a medal?

A mainstay of the Japanese program, Kosuge was one of the biggest names for a little recognized program.  But she threw some of the biggest skills throughout her years of competitions, and she consistently represented her country in senior elite competition for seven years.  At a time when the women’s program in Japan was not as a secure in training as they are today, Kosuge won five national titles and dutifully represented her country at the 1992 Olympics (as an individual with no full team) and in four World Championships.  She challenged herself with top skills, and worked hard to show off the best Japanese gymnastics had to offer.  While she often could not overcome the legendary programs she competed against, her impact on Japanese gymnastics is important, and her routines are worth re-watching today.  Fun fact: after she retired, Mari was a successful sports broadcaster in Japan.  In 2001, she moved to the US and was a volunteer assistant coach for UCLA!

Here is Kosuge and her supreme beam difficulty on beam in 1991.  Difficult mount, three layout step outs (with no back handspring), combinations, and full in pike dismount?  Don’t mind if we do……

These are just a few of my favorite gymnasts to go back and re-watch and re-appreciate.  Post your own faves who were underrated in their time!

Previous #2019British: Photo Gallery
Next The List: Before the Trend