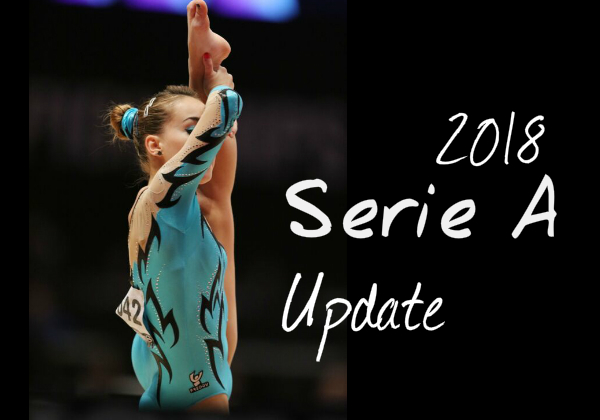 Like every year, the Serie A series started and we had the opportunity to have a look at the national team’s gymnasts for the first time. We got to see many promising young gymnasts, while many veterans are still nursing some injuries, like Erika Fasana and Martina Rizzelli, who both didn’t really heal after Rio, Vanessa Ferrari, who’s recovering from the Achilles injury, Martina Maggio, who should have been back after the knee injury she sustained before Worlds, but had to sit the competition after a small setback, and Sydney Saturnino, who’s having problems with her foot. Another bad news came from the unlucky Enus Mariani, who needs a back surgery and will probably be out for the rest of the year. On a brighter note**, Carlotta Ferlito** resumed training and competed on beam.

The Juniors were the highlight of the competition, with good difficulty and some upgrades:

Desireè Carofiglio, one of the most inconsistent gymnasts, was the first in the AA among the seniors. She vaulted a nice Yurchenko 1 ½ (14.00), was quite clean on bars aside a huge leg separation on her Pak (Ricna+ Pak, stalder 1/1+Maloney, bail, stalder+toe-on, double front, 5.5- 13.65). She also hit a great floor routine where she stuck her first two passes, too bad her jumps and leaps don’t match her passes (front layout+double front, Dowell, double tuck, front layout+front 1/1 twist, 5.0-13.40). Beam, her worst event, was a struggle, but she didn’t fall.** **

Lara Mori started the competition with a fall on the Ricna on bars (5.1-11.90) but redeemed herself on beam with a strong routine (bhs mount, bhs+loso+loso, side somi, side split, swicth half+split leap+wolf jump, aerial cartwheel, switch ring, triple twist dismount, 5.8-13.20). She debuted a new floor with Ksenia Afanasyeva’s 2012 music, which didn’t have her highest difficulty since she didn’t perform the double layout (full-in, Memmel+illusion, 2 ½ twist to front layout, triple twist, double pike, 5.4-13.75).** **

Elisa Meneghini went for the Rio routines. On vault she performed a Yurchenko 1 ½, clean but landed outside the line (13.75) and was fairly clean on bars, her weakest event (4.9 – 13.00). On beam, she went for the layout full and hit despite a huge wobble (switch split mount, round off+layout 1/1, side somi, switch side, front aerial+split jump+bhs, switch split+straddle jump+bhs, aerial cartwheel, stuck double pike dismount, 5.7-12.90). On floor she performed her most difficult routine, but fell on the double Arabian (double layout, double Arabian, full-in, double pike, 5.2 – 12.15). Despite the mistakes, Elisa looks ready to finally be a serious contender. She has the skills, she just needs to show in competition the upgrades she’s working on, and also she really needs to learn more difficult leaps and jumps, especially on floor, where her D score is quite low considering her passes.

Carlotta Ferlito, who took a pause from gymnastics to join a tv programme named “dance dance dance”, started training again a month ago, and since her club was having a rough time with injuries, she decided to take part in this competition on beam to help them. Carlotta performed an easy routine for her, but solid and with a lot of potential for the next months (front aerial+split ring jump, bhs+loso, switch split+straddle jump, split ring leap, split leap+aerial cartwheel, switch ring, double twist dismount, 5.1-12.65).

What’s not going too well: