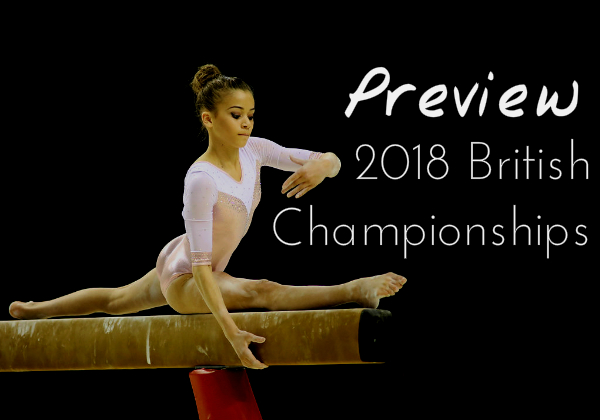 The time has come again for Britain’s finest gymnasts to flock to Liverpool’s Echo Arena for a head to head battle to which we will see a new British all-around champion crowned in 2018. With two of Britain’s finest all-around gymnasts, Ellie Downie and Claudia Fragapane, out due to injuries – the British title is very much up for grabs.

This will also be a good opportunity for those already due to compete at the Commonwealth Games and the Birmingham World Cup to showcase all their hard work and dedication in an arena setting, so there is a lot riding on this week of competition.

As mentioned, 2017 British and European AA champion, Ellie Downie, is out with an ankle injury and therefore withdrew her bid for the Commonwealth Games team. Claudia Fragapane, 2016 British AA champion and the 2017 world championship bronze medalist on floor, sustained a ruptured Achilles injury last week whilst training on floor.

Fragapane, who was due to compete at the Birmingham World Cup and the Commonwealth Games, is likely to miss the rest of the coming season.  So for the English girls, besides those who’ve already been confirmed to compete (Amy Tinkler, Georgia-Mae Fenton, Alice Kinsella and Kelly Simm) there comes a big window of opportunity to impress the selection committee and hopefully land a spot on the Commonwealth Games team. Alice Kinsella will replace Claudia at the Birmingham World Cup.

This championship is without a doubt Amy Tinkler’s to lose. The 2016 Olympic bronze medalist looked in good form at the recent English Championships, winning the all-around, vault and bars titles and is now the favorite to clinch a second British all-around title in Liverpool, adding to the one she won in 2015.

The race for silver and bronze will without a doubt be a fun one to watch. Biggest standouts for me are Georgia-Mae Fenton and Kelly Simm. Georgia, who finished third at the English championships, has been well known for her difficult and exciting bar work, but she has really started to step up as an all-arounder recently adding difficulty across all four events this year.

Kelly Simm, who recently placed 5th at the American Cup, is back after being hampered with injuries the past year and is looking to be in good shape ready to help the team at the Commonwealth Games. The 2015 University Games champion is well known for her powerful work on vault and floor, but has really improved her bar work as of late and has made finals on the event at world cups.

Another gymnast to look out for is Birmingham’s Taeja James, who won the junior all-around title last year. Taeja is considered to be a strong all-arounder and has been showing great difficulty recently, particularly in the video’s she’s posted on Instagram. In my opinion, if Taeja goes clean this week she would be the most likely gymnast to fill in for Claudia Fragapane at the Gold Coast meet, but again anything could happen in gymnastics.

Another prominent name competing is Becky Downie. Back from injury, Becky didn’t have the best showing at the recent English championships, competing only bars, which only scored a 12.600 and probably was the reason she was left off the Commonwealth Games team. However, wouldn’t surprise me if Becky comes into this competition, looking good on bars and beam and medals on both events. If she does that it wouldn’t surprise me if she gets added to the Commonwealth Games team.

Moving on to the junior competition, we will have the opportunity to see what Great Britain will have to offer for the future. There is an exciting pool of talent in the junior division and the heavy favorite has to be Amelie Morgan, who finished second behind Taeja James in 2017. Amelie is well known for her beautiful work on floor, where she won a bronze medal at the 2017 European Youth Olympic Festival.

Although some big names including Halle Hilton, teammate of Amy Tinkler, are absent due to injury, other names are expected to make a big splash at these championships including Phoebe Jakubczuk, Paige Thomas, Amelia Thomas, Hallie Copperwheat and Mia Scott are also names to look out for.

We will also see the Espoirs in action this week, this will be a new opportunity to see some new first years making their first appearance at the Echo Arena and a chance for us to have a glimpse of who we can look forward to watch in the future.

Some of those to look out for is Ruby Stacey, who recently became English champion in her category in the all-around and on the uneven bars, also we have second place finisher and vault champion from the English championships Alia Leat and also we have a duo from South Essex Gymnastics Club (Max Whitlock’s gym) Ellie Gargett and Paige Maroney, who both took the beam and floor titles at the English respectively.

You can find out more on how you can follow the competition by clicking here.