2017 Romanian Nationals: All Around 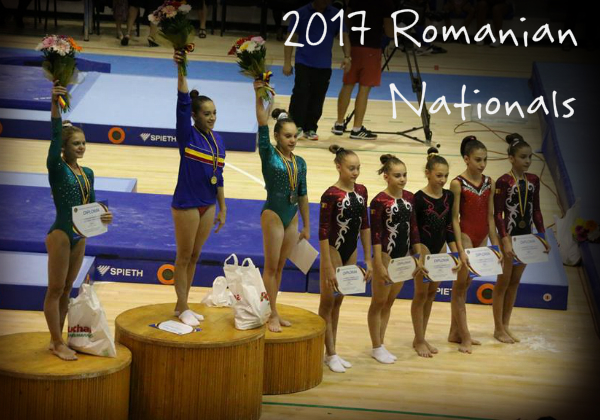 Larisa Iordache won her 6th (?) title in the all around at Romanian Nationals, on Saturday in Ploiesti. Iordache started with a solid bars routine, with tidier form compared to the Universiade: Maloney, clear hip circle pirouette to Tkachev, toe on pike Tkachev to Pak, van Leeuwe, pike Jaeger, half turn to full in dismount. She went on to get the highest score of the meet on balance beam (a 15.566): side aerial, flick to back tuck full, switch half, double turn  round-off to layout full to two feet (with bent knees), aerial walkover to split jump to flick (I wouldn’t have awarded this connection, she was a bit hesitant after the aerial), triple full dismount.

Can I say that I am not yet a big fan of her new floor music? I am sure I will love it live in Montreal but I am bummed that she doesn’t have something that offers more opportunity to dance, I always enjoy watching her. Her tumbling difficulty is still not the highest (no Silivas) but the execution was clean: full in, 2 1/2 to front layout (out of bounds), triple full, double pike stuck, her leaps look great and the double Y to Illusion pirouette combo was well controlled. On the last rotation she had a stuck and clean Yurchenko double full to win the all around with a 58.466 total.

Junior Denisa Golgota produced a surprise by winning the silver medal. Her score was boosted by the gorgeous DTY she managed to stick. She had an overall messy floor routine but with lots of potential: 1 1/2 to double back tuck, double Arabian (stepped oob), full in, double back pike (big step). Staying on on the UB routine was a nice bonus, I liked her energy and exuberance and she could build a serviceable routine for a team scenario but her form breaks were numerous and not minor. On beam she had a fall but  I thought she showed improved form compared to the first half of the year. Her total score was a 52.999.

Ioana Crisan finished only 3rd all around after mistakes on bars and floor. Her UB routine was going well Weiler kip, Maloney, Tkachev, Pak salto after which she stopped on the low bar, but she had the strength to continue her routine without stepping off, she dismounted with a double layout (form issues).  On floor she had two large landing mistakes: opened with a full in pike (OOB), followed by a stuck full in tuck, finished with a double back tuck with big bounce back out of bounds. Ioana had the 3rd balance beam score of the competition, with a 13.766 and a 6.0 difficulty. Her total was a 52.098.

Catalina Ponor competed on beam and floor. She had an uncharacteristically weak start with a beam routine with two falls (on the Onodi and split ring leap). Her planned routine was layout to two feet mount, flick – layout stepout -layout stepout, split leap to bhs 1/1, Onodi to ring jump, split ring leap, aerial walkover to split leap to Omelianchik, double pike dismount. She will be able to redeem herself in the finals as she was gifted a 13.36 by the judges despite the two falls (oh well, the perks of competing at home). On floor she has re-arranged her routine to insures she gets the full credit for the 4 requirements (especially the front tumbling). Her planned tumbling: double layout, whip-whip to double tuck, front tuck to double pike, double full to dismount. Visibly shaken after the two falls on beam, Catalina did not have the usual control over her floor landings. I am sure she will fix them for Worlds. What worried me more were the leaps and jumps , there were lots of bent knees and iffy positions.

Carmen Glavan from Constanta competed well on beam and floor with execution well into the 8s but she fell on uneven bars; she finished 4th with a 51.432. Maria Holbura was 5th with a 51.264, her best events were bars and beam. Other stand-out routines were Laura Jurca’s uneven bars routine for which she received a 12.7, she also had a very tidy FTY, Laura is coming back slowly. Iulia Berar hit a wonderful beam routine for which she received a 13.966/5.4.