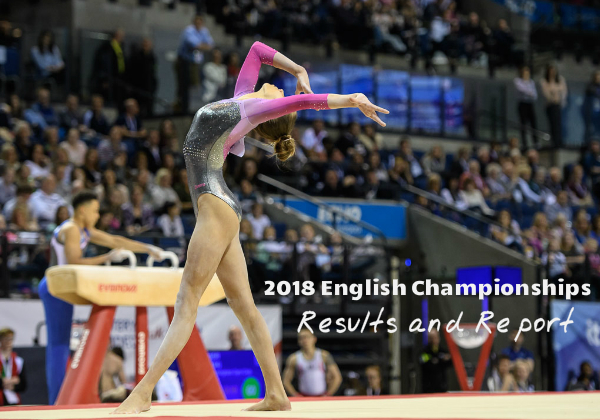 The English ladies competed this weekend in their first meet of 2018. They are at this point competing to qualify for the team that will represent England at the Commonwealth Games (4-15 April 2018). Thus the level was extremely high given the early date in the competition calendar.

The team will be built around Amy Tinkler and Claudia Fragapane, their most solid all arounders. Amy and Claudia looked competition ready, after having improved their uneven bars execution and after re-working their beam sets to avoid execution deductions and capitalize on difficulty. Georgia-Mae Fenton and Ellie Downie have the biggest potential for improvements over the next few weeks.

Amy Tinkler won the all around title with a total of 54.600. She did two vaults, averaging 14.530. Her bars set was impressive despite hitting her foot on the bar on the Markelov release (cast to handstand, toe-on full, Maloney, Tkachev to Pak, clean form in van Leeuwen, Markelov with break, full in dismount for a generous 13.7). On beam she fell on the opening acro series Gainer full to layout stepout but looked very good for the rest of the routine, especially on the stuck back tuck full  and the double pike dismount (13.2). Floor was her cleanest event with a score of 13.0 ( Silivas with hop back, double layout hop back 2 1/2 to front layout with messy legs, double pike with step to finish.

Claudia Fragapane finished on a close second (54.400 total): she was solid on vault with an Yurchenko double full for 14.200; on bars she looked very much improved with cleaner lines – pike Jaeger, pike Tkachev to Pak, toe on full to direct double layout dismount, this final connection looked especially good despite the step on landing and she was rewarded with a 13.65 for this routine. On beam she had a fall on a front tuck but the overall impression was also that she had worked to clean up her execution. The standing Arabian was really good, followed by a bhs to back tuck full, which replaced the layout and should attract less execution deductions in the future (13.05). On floor ( where she has the same music from 2017) she looked incredible with secure landings of all of her super difficult passes: full in stretched, double layout to wolf jump, double Arabian, double pike. The one major deduction that must have affected her overall score came on the leaps form but she still had the highest score on the event with a 13.500.

Finishing on a surprise third was Georgia-Mae Fenton, with a total score of 53.050. It’s great to see her back doing 4 events after the struggles of 2017. Fenton got a 14.05 on vault. On bars set was superb despite a fall on the dismount: Tkachev half to Ejova, toe on Shap, Ricna to bail, full in dismount and a completely unexpected fall (13.800). On beam she showcased her gorgeous lines: round-off layout stepout mount, Valdez – flick-layout stepout with big balance check, double turn, side aerial, switch leap to Y turn, 1 1/2 Y turn, aerial walkover, round-off double full (13.800). Her floor routine has a lot of artistic potential but low difficulty diminished her chances for a top finish on this apparatus ( a score of 11.800 for a double full, 1 1/2 to punch front, Memmel, double back tuck).

With a total of 52.700, Kelly Simm placed 4th. She had a clean bars set for 13.500 Stalder, toe on full, straddle Shaposh to Pak, Maloney, toe on Tkachev, Ricna, double layout dismount, with step. She was solid on floor with a double layout (step back), full in, 1 1/2 to double back tuck, punch front tuck to double pike (12.25). On beam she had a few major wobbles but her flick to layout to two feet series looked good, as did the round-off double tuck dismount (12.95).

Ellie Downie competed on bars, beam and floor and she looked strong despite watered down routines. Her floor tumbling was good –  1 1/2 to double Arabian, double tuck with hop back,  2 1/2, for a 12.400. On beam she received a 13.1 with generous scoring: punch front (big break), switch leap- switch half, flick layout stepout, double spin and hand went on the beam, split leap to side aerial, 2 1/2 dismount.

Becky Downie also competed on bars but by the looks of the score she received (12.600), she must have missed. She posted on social media that she has a “crazy” new routine. Hopefully we will be able to see it at the British Championships, in March.

A big thank you to Jessica Fox who took the time to record and post these videos on her youtube channel.